OUR VIEW FROM THE HELICOPTER

Whilst we are all at different stages in dealing with the global Coronavirus outbreak there are now some signs of a light at the end of the tunnel. There are already reports that in China people are appearing back on the streets and are going back to work. Spain says the outbreak is slowing and in South Korea recovered numbers outstrip those with the virus for the first time.

That means that in the not too distant future, we’ve got to pick up the reins again of whatever it is we do, whether we are running a business or a charity, whether we are in government or academia.

We absolutely guarantee that things will not return to how they were before. There will have been some permanent changes that affect you and your business. As a result you have no choice but to think differently about your business and NOW is the time to do it.

To stimulate some thinking and discussion we have listed below our thoughts on the industries, companies, technologies, charities, practices and activities that we believe will thrive going forward, and also those where their decline and possibly extinction is likely. In many cases this is merely an acceleration of what was already in train but for others not.

So what’s your recovery plan?

One thing is for sure: you will need to focus on marketing and sales now more than ever! And you need to ensure that you aim it at the right people - those with money to spend on what you have to offer. If you don’t know enough about marketing then why not take this unique opportunity we now have to put yourself through an online course? No matter what job role you have you need to understand marketing - just do it!

They are are already disappearing. You may recall a few years ago one of the top accounting firms published a comprehensive report into the whole international airline industry. One of their stark conclusions was that if you actually produced the accounts of airlines as you would any other business, no airline ever in history has actually made a profit!

We suspect there will now be a big consolidation, a number of airlines will disappear and prices will increase.

There’s got to be a spinoff from that to the commercial airline business, which is really just Boeing, which was already of course in significant trouble with the 737Max, and Airbus. It's unlikely governments will allow either of those to disappear but from now on they are going to be operating at significantly below the capacity they currently have.

This sector has been in decline now for some time as a result of the increase online buying and changes in lifestyle and fashion. The crisis has probably accelerated all that. Whilst we have been confined to our homes we’ve had to buy online for other than basics and it must be highly likely we’re going to carry on doing so.

The Marks and Spencer model has been out of date for at least 20 years and whilst they have tried to fix it it’s all been evolution and no revolution. We suspect the time has come for a massive revolution in the stores based on the same model ... or it will simply disappear.

Some of you will recall in one of our newsletters last year talking about a retail company in the UK, The Hut Group. It’s valued at about £4bn - the same as Marks and Spencer - and has 5,500 employees. The co-founder and CEO, Matt Moulding, runs the entire  business from his iPhone with a dashboard that keeps him up to date with the business in real time. “With this I can develop a strategy on an immense scale,” he says.

The trick has been to build its infrastructure from the ground up. Other companies have a “colossal mixed bag of everyone else’s tech”, Moulding says, but THG has developed its own warehouse management systems, web services and logistics software. Owning the technology allows him to stay in control of everything else: production, marketing and distribution. Last year, THG earned about £40m from licensing its technology to other businesses.

Revolution! - this must be the model for the future.

High speed internet providers are flourishing because so many of us are now working from home.

There’s a spinoff here on governments. Surely every government needs to adopt the attitude of South Korea and ensure that there is the fastest possible high bandwidth broadband available everywhere.
Here's what they are doing in Kenya - balloons!
​
We know there are countries where the governments have been actively resisting this because they fear what happened during the Arab Spring.​
We are not convinced that it’s possible for them to resist it any longer.

We will also be keeping an eye on the 5G conversation that is currently sparking controversy across the globe.

Maybe we can say the same thing about international tourism?  Although there is the possibility that the wanderlust of individuals will - at least in the short term - increase and benefit from the special offers that will abound as the travel and tourism industry spend massive effort on getting visitors back into their establishments.

Nevertheless, maybe we will now need less airports as a result?

Many charities are suffering badly through this crisis as they are not getting the philanthropic monies coming in as normal.
You need to revolutionise - you need to make it easy for us to give online with a minimum number of keystrokes, no paperwork, and no subsequent hassling us for more. You also need to make sure that we know what difference contributions will - and have - made. Your communication skills and efforts will now be more important than ever.

We mentioned the CEO of THG earlier who operates his £4bn business from his smartphone. We would suggest that were someone like him be minded to give to charity either personally or corporately he or she would expect that to take just 5 minutes of their time and be a simple process using his or her smart phone.

Charities - we are worried about you!
So here’s your checklist of what you need to do: ​Do not let anyone, especially your trustees, stop from doing this and doing it very quickly indeed. If you don’t you may just disappear.

A big positive to come out of the crisis has been to see companies and academia working together and moving incredibly quickly with remarkable adaptibility, flexibility and a can do attitude to meet a national or international need.

Maybe we last saw this during the Second World War.
Companies like Dyson in the UK - a vacuum cleaner maker - have moved into making ventilators at lower prices than normally seen. Rolls Royce, McLaren, Babcock, Mercedes AMG F1, Smiths, GKN & Thales are doing the same and with Standard Chartered bank providing finance for any such activity.

Boots the Chemist has set up walk-through Covid-19 testing centres around the UK, initially for members of the NHS.

Kingsgate Clothing Group in South Africa has launched a project to produce face masks close to the standard of the FFP2 and N95 masks.

Post crisis we must learn the lesson that that is the way forward.

‘If it ain’t broke don’t fix it’ attitudes have got to go forever - we are in a world where things everything is changing at eye watering speed - be it technology, markets, politics or pandemics.

None of us can risk even a nano second of resting on our laurels if we are to survive, let alone thrive.

We think this will be a big revolution. We still find many companies and charities big and small have a fixation with 9 to 5 working five days a week.

In 2011 Juanita set up her company to function completely remotely, and she only recruits employees that have the ability to work with self-discipline within a prescribed framework. Over the past few weeks this has been a great source of comfort for their clients as there was no downtime in service delivery once the South African lockdown started.

We think the traditional attitude of work places and times is going to be swept away now as home working with flexible hours has been proved to work. Companies will no longer be able to require people to be at their place of work every day of the week. The same applies for government, charities, indeed every sector there is because we can do so much remotely these days.

It will be interesting to see what the impact on commercial real estate will be in the medium and long term.

In the world of professional speaking, our world, we think this is finally the nail in the coffin for the original “motivational” speakers. In the industry, we often refer to them as “Chinese meal” speakers - you know you’ve had something good, but two hours later you can’t remember what it is!

We are now into the era of high content speakers giving significant takeaways that attendees can act on immediately for the benefit of them and all the organisations that they work with or for.

At the end of the crisis we will many will be poorer and we fervently hope this hiatus causes universities to finally do revolution!

We cannot expect students to take on the burden of the size of student debt that they do now. There is a very easy way to reduce that debt.

A typical degree course is 3 years with each year comprising 3 terms of 8 weeks - that’s just 24 weeks in a year or 72 course study weeks in total.

Roger says: "Way back when I did my honours degree I went for what was called a ‘thin sandwich’ course.  I was sponsored by a company and each year I spent 20 weeks at university and 20 weeks working in the company - in other words a total 40 weeks a year. These courses no longer exist but it does prove what is possible!"

So let’s have universities move to a standard degree course format of 2 x 36 week years.
​
The improvements in productivity, reduction in student loans and benefit to all would  be massive

During this period of isolation and grocery store only visits we imagine a lot of us have got used of not using cash. Cash after all is handled by many people whereas our (contactless) credit card does not need to be touched by anything or anybody but us.

Sweden has shown how easy it is to become cashless and we suspect we will all now be moving to a cashless society even faster than we thought we were going to.

Several banks in Africa have already successfully implemented admirable projects that allow even the smallest of informal traders access to mobile, cashless transactions. 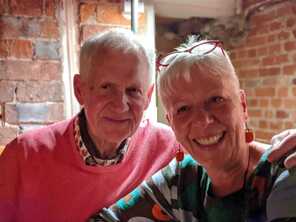 Roger and his wife, Chris, have both had grey (more correctly white) hair from quite young. They’ve been amused therefore  to see celebrities, broadcasters and and others, both women and men, now broadcasting from their homes, with their roots growing out and their grey hair coming through.